I’ve been guiding Deer for long enough to have heard an excuse or two for why someone missed an opportunity.  Hey I have my own Deer to excuse, let alone everyone else’s.  One morning it dawned on me how much our Cell Phones mess up Deer Hunts.  Lets start with the obvious issues, who hasn’t had a ringer or alert go off when they were supposed to be sitting quietly?  Lucky for me, some Whitetail don’t correlate the sound of the paper airplane email taking off from my Mac as a direct threat, they should, but they didn’t flinch.  Deer will bust you for less, we all know this, but when I said it dawned on me one morning it was just that.  I had begun to glass a wheat field near where my Hunter was sitting when I saw what I quickly figured out was my hunter illuminated 16’ off the ground staring at his phone.  It wasn’t dark, but it was dark enough to see with my optics, I can’t imagine what the Deer could see in the woods.  There are a few problems aside from being seen, what about your vision?  If you are like me you’re looking at your phone around sunset to check in real quick before the final 30 minutes, well have you ever had to quickly put your phone down and look into the shade at sundown?  Yeah, that’ll cost you a huge Buck.  The best thing to do with your phone when you’re up in the tree is to not even use it.  Sure you could leave it in the truck but, well then what?  I believe the internet makes some sits bearable.  I know for a fact that the internet, or texts, or any app for that matter saves lives.  Just imagine for a second how many Deer have slid by behind you on the hoof before you could have seen them, never to be seen again.  Do you think this happens everyday?  Would that be hard to believe? Not for me.  I feel that when I apply myself I’ll see Deer most every time I go out.
There’s no good answer here folks, you just have to put your phone up the last hour of the day and the first hour.  If they see you in that tree its kind of like us seeing a mountain lion on a certain rock, you don’t tend to forget it and you’ll look at that rock sideways for the rest of your life.  Deer do know you’re bad news when they find you, don’t let the compound interest take you out when the Deer are so educated they’re nearly impossible to hunt.  If you haven’t yourself experienced a loss from tech itself, learn from us.  My client Robert admitted to me that he was on facebook at 8am when he heard a thud.  He looked over and he said he was wide, tall and chocolate, he was Busted and no one ever saw that Deer again.  Laugh all you want, you know you do it too, and if its not this its napping or reading Maxim over lunch.  The best advice I can give you is to remember where you are.  This is the place you’ve been daydreaming about being all damn year, this is the place where you make memories that’ll last your whole life.  Stay off the phone, it’ll be there tonight. 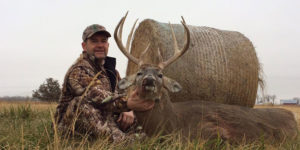